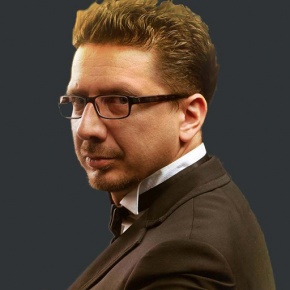 Cédric Biscay is the President & CEO of the Monaco-based production company, Shibuya Productions.

He is impassioned with pop culture from a very early age. In 2002, when he has just turned 22, he founded his first consulting company with Japan while being chosen by the Japan External Trade Organization as adviser and representative for French Riviera and the Principality of Monaco.

His multi-sectorial expertise led him to actively work on the development of numerous events and seminars. Such as the Annecy International Animated Film Festival, the Tokyo International Film Festival or the Tokyo Anime Fair and to create MAGIC, the Monaco Anime Game International Conferences, in 2015 and later MAGIC Kyoto in 2018.

Cédric Biscay hosts a weekly pop culture radio show on Radio Monaco, national radio station. He has been teaching for master’s degree students at Nice-Sophia Antipolis Polytechnic University for more than 10 years. A few years ago, Cédric has co-founded the first French school combining manga, video games and animation classes, called GENIMAGE in Marseille, in the South of France.

In 2020, he published, as an author, his first manga named Blitz. A story about chess in collaboration with the former World Champion Garry Kasparov.  The aim of this manga is to explain Intuition, AI and chess strategies to the young generations.

He has received various awards and honors including 2 Guinness World Records regarding the crowdfunding of the very anticipated video game Shenmue 3.

His work by helping and promoting, in a very concrete way, the relationship between Japan and Monaco, led him to receive the Certificate of Honor of the Minister of the Foreign Affairs of Japan.

He is listed among the 100 most active people of Monaco by l’Observateur de Monaco and featured among the 40 people of 2019 by French newspaper Nice-Matin.

His strong belief regarding the fact that Gamification should be in the center of every cause, led him to become an advisory board member of Activbody, a leading US company dedicated to wellness.He is also working on bringing gamification into the green economy and sustainability.